Many of us in the USA use the Mayer-Johnson Picture Communication Symbols (PCS) for visual communication in our classrooms. Mayer-Johnson PCS offers us 9,100 clear images for about $500.00 which includes all symbol addendums. Boardmaker also seems to be the best software available for intergrating symbols into documents and communication boards. A key feature of Boardmaker is its

DynaSyms, originally designed for use on Dynavox Devices, are now available only on Dynavox products or as an addendum to Boardmaker. Many other symbol sets even recommend Boardmaker for using their symbols. However, there are other symbol systems to consider.

Similar to PCS is the Widgit Rebus Symbols, which became known to many of us in the SpEd field in the US with the software Writing with Symbols. There are currently 26,000 Widgit Symbols with more on the way.

Gus Communications has also designed a product to compete with Boardmaker called Overboard. It has only about 5,500 symbols, integrated speech and includes a free Boardmaker converter download. Overboard runs about $200.00. A number of other companies also have similar programs, but they have less than 1,000 symbols or are of the poorest quality so I won't mention them here.

Picture Master Board Designer is another Boardmaker competitor, however it only has 18,000 symbols, many of which are duplicates in their efforts to offer differing levels of complexity in their images. IMHO, the Picture Master Symbols are generally of poor quality for use in special needs classrooms. The Board Designer software is currently "on special" for $200.00.

Silver Lining Media offers "Picture This" communication board software that utilizes 5,000 photographs. Thousands more photos and symbols are available in add on sets. This product was designed to compete with Boardmaker, but is also compatible with Boardmaker and costs about $90.00. Kid Access offers a set of 1,000 symbols called "Eye-cons" also for $90.00. Kid Access claims the "Eye-cons" are more abstract than photos and more concrete than PCS, but the samples I saw were much less concrete than PCS and of poorer quality.

A number of international companies have the hold on the picture symbol market in their country. Makaton is a British symbol set, like PCS, that is very broadly used in the UK and other countries. They have 7,500 symbols available with 1,900 new symbols scheduled for release in 2007. It is difficult to gauge the price given how the symbols are bundled and sold. My guess is that it would cost at least $300.00 to acquire most of their symbols. Compic is a set of about

1,500 pictograph symbols mainly used in Australia, it runs about $350.00. Pictogram Ideogram Communication Symbols are mainly used in Canada, there are about 900 white on block pictograms available on a CD-ROM from the Zygo Company.

A few places even have free symbol sets! Imagine Symbols which offers 4,000 symbols consisting of clearly drawn images. Children with Special Needs has free downloads of picture and photo symbols as well as a few other resources. Do2Learn has hundreds of age appropriate looking black and white line drawings appropriate for schools available for free download. The AMDI company offers Tech/Syms free of charge if you register. I think there symbols are a bit young and look a tad like Manga. Other websites offer curriculum specific symbols/icons such as these for science. 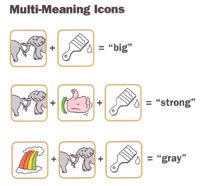 A final symbol system I should mention is Minspeak. Minspeak is a system that uses combinations of icons to create new words or phrases. For example, "rainbow" + "heart" means "red". The system of Minspeak is complex and not for those with significant or even moderate cognitive disabilities, but for those with multiple physical issues and minimal cognitive issues this is the absolute fastest AAC system I can think of. Minspeak is offered on Prentke Romich Products where it is called Unity. It is also offered on the ChatBox by Saltillo where it is called Talk Today. More information is available from Novita Tech.
at 8:14:00 PM