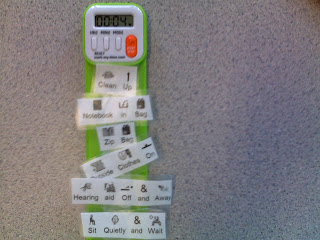 This afternoon, leafing through a Mayer-Johnson catalog I saw an idea I posted about on September 7, 2007.  They say imitation is the most sincere form of flattery.

The idea was to use the "Mark-My-Time" bookmark as a visual schedule.  In 2007 I had a student who was in need of working on his independence and time management skills as he prepared to leave for the day and using the "Mark-My-Time" bookmark as a visual schedule was just what we needed.  Since then I have used the bookmark/timer adapted with some self-adhesive velcro for not only visual schedules but also for a token holder/star chart for students collecting tokens/star during differential reinforcement of zero rates of behavior or differential reinforcementb of incompatible behaviors.

It seems Mayer-Johnson and Turning Point Technology are both carrying the adapted Mark-my-Time bookmarks created by Augmentative Resources.  Of course the Mark-My-Time Book mark retails at $8.44 on Amazon.com (and you can find it for as low as $6.70) and the adapted version will cost you up to $30.00.  Then again, the original bookmark from Amazon and some self-adhesive velcro strips or a glue gun and some velcro receptive fabric should create the $18.00 version of the adapted bookmark/timer for less than $10.00.  Which saves you enough to by two Mark-My-Time bookmarks at the unadapted price!
at 8:34:00 PM