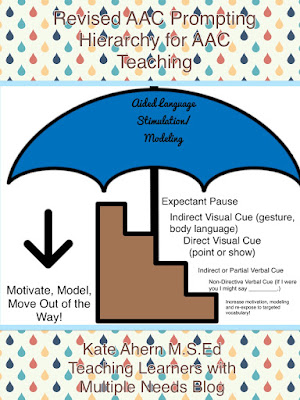 Prompting Hierarchies have been a staple in special education, behavioral methodology andcommunication therapy for some time. However, when it comes to children with severe apraxia, with or without coexisting anxiety, (Rett Syndrome, Angelman Syndrome, ASD, etc) the commonly used prompting hierarchy can complicate instead of simplify teaching augmentative and alternative communication.

Many studies now support aided language stimulation or direct modeling as a primary intervention that should be ongoing and intense with child who are learning to use AAC. Given this knowledge we should move modeling from a step in the hierarchy to the umbrella that covers all of the other steps in AAC teaching.

Another flaw in the commonly used prompting hierarchy in AAC is the use of direct verbal/requesting a response/giving a command as a "cue" or "prompt". Telling a child what to "say" with their talker isn't a cue or prompt. It is a command and usually it is testing. When we equate communication with testing we lose out on what drives communication (and humanity, when it comes down to it) - an inherent desire to connect with another person. Sometimes that connection is about meeting a need or want and sometimes it is about sharing information, being polite or socially being part of an interaction. But we negate that when we command child to say something specific. Furthermore, such demanding/testing type interactions increase anxiety (fear of getting it wrong, fear of disappointing, etc), oppositional behavior (the child's desire to prove that the he or she has power) and apraxia.

Apraxia is a neurological disability that impacts the child's ability to follow a direction in spite of the directive being understood, a desire to follow the directive, the physical ability to follow the directive and sometimes, a previously shown ability to follow the directive. In short, the more the child WANTS to do something the more apraxia stops them. This is neurological, NOT a behavior. Anxiety and demands increase the apraxia. So the child might still be working through the previous levels of cues you have given but then you make the demand "show me_______" or "say_________" and all bets are off! It will be nearly impossible for the child to do as you say at this point. Creating a amicable bond, sometimes even an almost conspiratorial connection is much more likely to enable a child with severe apraxia to be able to communicate. Non-directive and non-confrontational is the way to go in apraxia if you want results!

Finally there is the issue of "hands-on" cueing. What does "hands-on" cueing really mean? It basically means we MAKE the child press or activate buttons on their devices. (The child actively taking your hand is different than you taking the child's hand.  Yet, this should still be faded as soon as possible.)   Hand-over-hand and hand-under-hand both are hands-on.

What does a hands-on, full physical "cue" this tell the child? It tells them that A) we have the right to manipulate their bodies or make them touch or do things whether they want to or not and B) that we have the right to force them to say things just because we want them to say it. It teaches them that if they don't comply with a directive (regardless of if they understood it or if apraxia stood in their way) we will make them comply with the directive.

Our students are some of the most vulnerable human being anywhere. Consider this statistic:

More than 70 percent of those with disabilities polled said they had been abused and over 60 percent of family members indicated that their loved one with special needs had been mistreated. (http://www.disabilityandabuse.org/survey/survey-report.pdf)

More than ninety percent (90%) of people (both male and female) with developmental disabilities will experience sexual abuse at some point in their lives. Forty-nine percent (49%) will experience ten or more abuse incidents. (Valenti-Hein, D. & Schwartz, L. (1995). The Sexual Abuse Interview for Those with Developmental Disabilities. James Stanfield Company. Santa Barbara: California)

Now tell me again how is it ok to teach children who have significant disabilities that they should allow others to make them do things with their hands and that they should allow others to "put words in their mouths"? We have almost a sacred duty to do everything in out power as educators, therapists, caregivers, parents to prevent abuse of our students - now and in the future. And this starts with teaching them that they have the right to be respected in what they do (and don't do) as well as what they say (and don't say). It might be the most important thing we do. We must take it seriously. We must make it a priority. And that means finding new ways to teach and "cue"/"prompt" (it definitely isn't a prompt if it is hands-on). We are an intelligent, creative and compassionate field, certainly we can find other ways?

Additionally a "full physical" or hands-on situation, where we make the child "say" something with the device, teaches the child that language/words are something put upon them by others.  If we want our students to see the power of their AAC systems we must let them see, in both our modeling and in how we teach and respond to their AAC, that the power of language/words is that it comes from INSIDE us and can affect those OUTSIDE us.  Children can't learn that if we are constantly putting them in a position where the words come from someone else who is physically making them access their communication system.  In teaching AAC we are setting the child's attitude about using their speech system for the rest of their life.  It is so much better that we teach them the value of their system from the beginning instead of having to combat a negative attitude about their communication system that is created by how we taught them in the first place.

Why don't we force the issue until we get the device activation we want? Because communication isn't a test and nothing is so important that we put our hands on and make them say something. Instead we increase the motivation of the child (through preferred activities, child led sessions and our own demeanor), we increase the modeling of the AAC device or system and we move out of the way and let the child come to an understanding of their communication system and the power it has through repeated meaningful experiences. 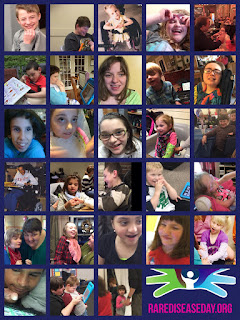 February 29th is Rare Disease Day
So many of the children I work with and adore have rare diseases. I hope today doesn't just increase awareness of those who rare diseases and the need for research into improving their quality of life today and finding treatments and cures in the future but also the potential in each of these amazing individuals. I learn far more for the children I work with than they learn from me. They all have something to offer the world and we all have something to learn.

The children I work with have many syndrome and disorders among them Rett Syndrome, Angelman Syndrome, Cockayne Syndrome, Pitt-Hopkins syndrome, forms of muscular and leukodystrophies, various Mitochondrial Diseases and more recently identified rare genetic disorders with only genetic names CDKL5, GRIN2B, FOXG1 Many of these disorders are life limiting still for many a cure may be on the horizon. Our job as educators is to keep our students ready educationally, emotionally and physically for that cure, whenever it may come. Our jobs are vital, to see in each rare child the potential that is inherent but hidden to many.
at 1:24:00 AM No comments: