I am just sitting here thinking about how random some AAC device activations can seem when they aren't. Two examples from a child today: 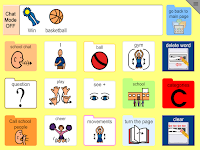 1) at the park the child pointed at her friend and then said "win basketball". No basketballs in sight. It took me a minute and I never would have figured it out if I didn't know the friend and her mom. My student's friend's basketball team had recently won the championship.  It would have been easy to ignore or tell her that there weren't any basketballs around. And though this student has some excellent and emerging AAC skills she doesn't yet know how to repair. So, had I dismissed her comment she would have just gone along with it. It terrifies me a little how much power the communication partner, in this case, me, has in interacting and learning with an AAC user.  "Win basketball"? Spot on.


2) later we were tired and sitting in the student's living room, she had just asked for her one of her favorite AAC activities - FaceTime. Luckily my relatives, a few friends and the student's grandmother are very willing to oblige her desire for a sometimes very distracted video chat. So we reached my cousin on the FaceTime and at the end of the conversation the student says "dishcloth" twice. I told her I didn't understand and it was time to say bye, essentially dismissing her comment as a random activation. We hung up and the student hands me something she had accidentally put in her mouth while her aide hands her, you guessed it, a nearby dishcloth! The student wiped her hands and I felt like a jerk. It wasn't obvious or anything, I didn't feel like a jerk for missing what she might of meant.

I felt like a jerk for forgetting the first rule of improv, which is also the first rule of chatting with an emergent AAC user as well - "yes, and?" In improv you always go with what is said, you don't shoot anything, down you are flexible and you go with it. Now your improv partner is barking like a dog? You don't say "Wait, we were pretending to be in a bank" you say, "Oh no! The bank robber hypnotized you! I knew I recognized him!" Or just about anything else to keep the exchange going. And in chatting with an AAC user you don't say "Dishcloth? I don't know what that means." (And then change the subject.) Instead you say, "Oh, a dishcloth? What about a dishcloth?" Yes, and?


P.S. All of the rules of improv, especially the first five, are powerful in working with early, beginner and emergent AAC users: