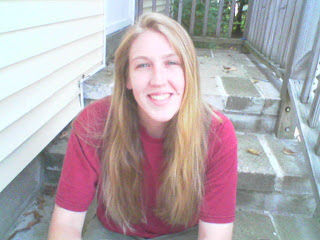 from the Lowell Sun

Stacey P. Ahern of Chelmsford, writer and author; 29 CHELMSFORD Stacey P. Ahern, 29, of Chelmsford, died on Thursday, March 20, 2008. She was a beloved sister, daughter, and Godmother. Stacey was born on February 28, 1979, in Lowell, a daughter of Carol Gendron-Ahern of Chelmsford, and Brendan M. Ahern of Lowell. She received her early education in the Chelmsford School System, and went on to attend Chelmsford High School, and graduated from Nashoba Valley Technical High School in 1997. She attended Middlesex Community College prior to attending Sarah Lawrence College in Bronxville, NY where she was a senior studying Writing and Literature.

In addition to her loving parents, she is survived by her grandparents, Albert Gendron and his wife, Priscilla of Lowell; a brother, Brendan Ahern of Hawaii; a sister, Kate Ahern of Haverhill; a godchild, Anthony Torres; her boyfriend, Gilbert Escamilla of Manhattan, NY; her father's dearest friend, Diann Hamblett of Chelmsford; and many cousins, aunts, uncles, and close friends.

AHERN Stacey P. Ahern, 29, of Chelmsford, died on Thursday, March 20, 2008. Visiting hours will be held on Tuesday evening from 4 to 8 p.m. at the BLAKE FUNERAL HOME, 24 Worthen St., Chelmsford. A Funeral Mass will be offered on Wednesday morning at 9 o'clock at St. Mary's Church, Chelmsford. In lieu of flowers donations may be made in Stacey's name to the Sarah Lawrence College, College Resources, 1 Mead Way, Bronxville, NY 10708. Please include In memory of Stacey Ahern in Check Memo. Arrangements by BLAKE FUNERAL HOME, Chelmsford. www.blakefuneralhome.com