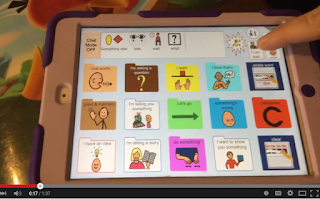 Video Modeling is an evidence based practice in special education.  Entire new companies have
popped up claiming their way of doing it is magical even!  However, it doesn't take much to do effective video modeling for any skill, including Augmentative and Alternative Communication.  Essentially all you need is the child's communication system or a duplicate of it and a way to record video - which can be your phone, a tablet or a camera.

The purpose of video modeling is to create a video representation of a skill that can be watched and imitated.  Video modeling doesn't replace instruction, visual supports or interaction.  Instead it reinforces skills taught and, for some learners, can act almost as a video encyclopedia where they can "look up" how to perform a skill.  Video modeling in AAC allows students to have additional aided language stimulation outside of instruction or interactions.  It can also be a way for the student to review vocabulary they have learned.  Video models of AAC can be used instructionally or students can self-select watching them during leisure time.

There are quite a few resources online to guide the process of selecting what to target for video modeling, creating the video and collecting data on video modeling effectiveness, such as this one from the National Professional Development Center on Autism Spectrum Disorders. There is also much to be found on Google Scholar to provide as evidence that video modeling is best practice.

In general I use a more relaxed approach to video modeling for AAC with the following in mind:
Sample Video Models
Video model of how to say stop.


Video Model of Drink with a Puppet


This video shows a model of how to find the word "parade" after the student asked for it.

Here is a video of a student who got herself into a situation where she needed help.  (She insisted I make the video before I helped her! Just so you think I didn't leave her stranded!)

Video Model Sample from Other People
Asking for More While Shredding