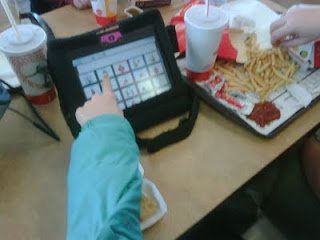 Still I think we were ahead of so many places. This is just because our students had speech devices at all. Our school believed that if a student did not have the means to communicate everything he or she wanted or needed to say then an AAC system was called for. In many ways this is head and shoulders above other schools.

Yet, often times parents never met the sales reps, sometimes families weren't part of the rental/data collection period and in the end many of the students I worked with left their speech devices at school or never took them out of their bags at home. This is in spite of being proficient users in the classroom. Something is very wrong with the process if the end result is a user who only uses the speech device in the classroom. We also made sure every student with a high tech AAC device had programming time on his or her IEP weekly.

Those parents who did use the devices at home were sometimes forbidden to program the device, as were some paraprofessionals and teachers. For programming changes to be made a note needed to be left for the SLP (and it could take a few days or weeks to make the changes), regardless of how simple the programming change, the knowledge of the person making the change, etc. If the teacher, for example, made a new page because there was an unexpected trip to Taco Bell and no vocabulary for ordering there then that teacher might be scolded. Sometimes the person desiring to make a change to a speech device would have the know-how to create a visual schedule, photo album, game or juke box on the device, but would not be able to because he or she was not "qualified". On occasion the SLP would "lock" the families and the rest of the TEAM out of the device (using the device's password) to stop others from programming messages and preserve the professional centric AAC system. Other times the device would be taken from the student for the IEP mandated programming without the user present, meaning the child did not have the device for class time (sometimes for preferred activities) or, occasionally, overnight.

Situations like this destroy the trust of the families and the users that we need to be working with and for in our jobs. When we lose focus on those we signed up to educate and aide in finding their voice and instead make their worlds professional centric they loose, and we loose as well. We loose because users and families may turn to helplessness and give up (and not use the device at home for example), or those users and families may turn to hostility and we will end up in battle after battle. In both situations what we all want for the child doesn't happen; the child doesn't get the education of find his or her voice.

Over at Fighting Monsters with Rubber Swords author Rob Rummel shares about a debate between users and professionals online and his own experience with such a professional centric system. If we, as professionals, especially SLPs and AT specialists, can read this post with humility (and think outside of our boxes) perhaps we can see more students using devices to excel like Rob's daughter Schuyler; instead of students who do not have a device, have an inappropriate device, have a device that can not grow with them or only use their device at school because it was a professional centric decision making process with no family/user "buy-in".
at 11:57:00 PM