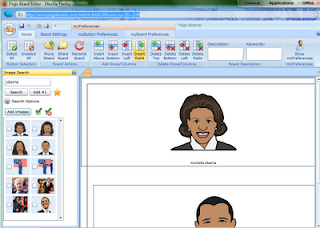 
Pogo Boards is a new online communication board making resource in the same line of thinking as Mrs. Riley It's In the Cards, which was actually the first, full featured online board making and sharing program.

Pogo Boards was developed by Talk to Me Technologies and had 800+ beta testers (I assume in private beta). They have had 12,000+ people sign-up for the limited use version of the online program since debut a few days ago.

First off Pogo Boards has some quirky, and in what may have been an isolated case for me, very annoying, software and hardware requirements. You must have Adobe Reader (or another Adobe Reading software) installed as well as Microsoft Silverlight (which is not a program most of us have installed, like Adobe Flash or Java). Thus if you are at work, work in a school and do not have administrative privileges you might as well stop trying right here. (That's probably 75% or more of us.)

(The advantage of Silverlight is if you are using Microsoft Office 2007 the interface will feel very familiar, but we are working in education, so chances are you are using Office 2003 or earlier, or you have switched to an online word processing program.)

The next issue would seem that the "basic account" which is advertised as "free" is pretty worthless because you cannot print boards without a watermark across them and it is very limited. They should call it a "limited feature trial membership". Nor is there a 30, 14 day, 7 day or 1 day free trial in which to see all of the site features. Trainers and district purchasers who have asked for full access to show Pogo Boards or determine if the product is appropriate have been told this is not an option. If you do want to take advantage of the "basic account" the registration form is lengthy, which is unusual as most web 2.0 applications have learned that folks do not generally want to fill out long forms just to try things out.

Also the "basic account" is in many ways "nagware" because whenever you try to do anything such as save, print, or even delete or replace symbols you get an error message that you need to upgrade to a paid account to enjoy that feature. I used to have a student who would say, "Nag, nag, nag!", whenever he knew he was being a little annoying about asking for something over and over and all I could think was, "Nag, nag, nag!", while I was using my "basic account".

The boardmaking interface itself is a bit clumsy. You search for your image and then "check" the one you want and mouse click on the square where you want it. Not exactly the drag and drop beauty that is Mrs. Riley It's In the Cards. Nor does it have the features we all know and love from Boardmaker... or maybe it does, who knows with the limited trial.

Another bug is that it took a very long time for each of the computers I tried the program on to open up the Silverlight based boardmaking window. Which is usually fine with me, school computers and special needs software running computers are notoriously slow, however Pogo Boards won't let you do anything else when you have the Silverlight/Pogo Board application open (or trying to open). Thus I couldn't just click to another tab on my browser and read e-mail or my RSS reader. This alone would make me never use the website, so I hope they fix that bug.

Support wise there are online videos for training and place to submit forms with questions.

Finally there is the issue of combined symbol sets, Pogo Boards offers a new symbol set called PiCS, the SymbolStix set by the News-2-You people, images from Google Images and clip art images. Many users may not understand the importance of a cohesive set of symbols (not mixing symbol sets), using the same symbol to mean the same thing across multiple boards and the heirarchy of using photos to picture symbols. This means that shared boards, which is one of the lures to entice subscription, may be of little value and may actually be confusing and cause problems with some learners who have communication and intellectual disabilities.

The cost for Pogo Boards is (buried deep in the FAQ and is) tiered based on the number of subscriptions. One year, for one user, is $69.99. This compares to Mrs. Riley It's In the Cards at $45 for one year. It also compares to $79.99 for one year's access to Adapted Learning's Print Editor (which allows you to change and print boards on the Adapted Learning website if you have a valid license number for a Boardmaker disc).

(The only appeal of Pogo Boards to me is the ability to make boards that have Symbol Stix to match my Unique Curriculm, but that is not enough of an appeal to make me join and pay that price.)
at 8:54:00 PM