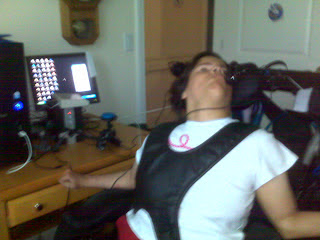 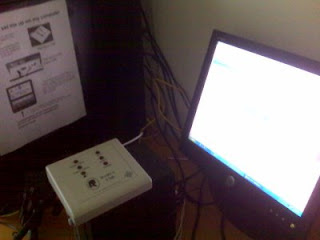 This is T, a former student of mine, who now lives a few towns over in a group living situation and works in program for adults with disabilities. She asked me if she could show off her computer prowess online.

T is profoundly blind, has athetoid cerebral palsy and mild hearing loss. She uses a Darci USB with a single switch at right temple to type using Morse Code on her computer. Using her left switch she accesses Jaws, her screen reader (which was not really cooperating for her today) via a switch interface. The University of Massachusetts at Lowell Engineering Department took T's computer on as a project and build her a special speaker mount which drops down from her push bars on the back of her wheelchair so she can hear her Morse Code beeps and Jaws better. (Sidenote: hearing those beeps brought back all those years of her in my classroom, beeping away at her school work. I'll never forget the month we spent learning about contractions in spelling.)

Next to her monitor hangs a sign her old school (after my class) made her so the program assistant at her house can set up her computer. It explains step by step, in simple language, what to do, a brilliant idea.

Today T was asking about switching to a different service for her instant messaging, perhaps Meebo or Miranda- something that will allow her to chat with friends who use all sorts of different instant messagers. Does anyone out there know how these will behave with Jaws? (The Darci behaves like a regular keyboard so that is less of an issue if her correspondent is patient.) T tried to join QIAT today so she could ask the group for herself (she's an independent kind of gal), but their site up website was down. Also T and I chatted about maybe using Twitter or Plurk, but they seem less likely to get along with Jaws. She is really looking to create some community. Ideas?

You can see more pictures of T online. Here she is skiing as a Wednesday's Child with a local TV celebrity and her dad. Here she is in her senior photograph for the class of 2007 from Perkins School for the Blind (PDF-click, don't try to open in a new tab). I wish I could find a picture of T with her favorite celebrity, Celine Dion, who she has met twice, but there doesn't seem to be any on line.
at 9:11:00 PM