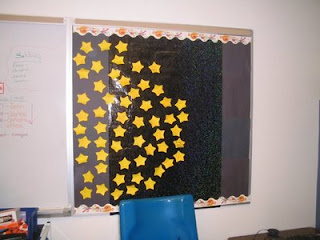 Last week Mayer-Johnson's new sharing site hit Adapted Learning hit it's 1,000th upload of a file (or set of files) and low and behold I uploaded it (it was my Letter to President Obama Cut and Paste Activity)! Bob G. at Mayer-Johnson contacted me today and offered me a tee shirt for being their 1,000th upload! I plan to use the tee-shirt as reward for the student in my class with the most stars on our star board which was filled up today! (Big news in our world! In the event of a tie we will have a raffle.)

It does strike me as odd that it A) took my class this long to fill the star board (every inch of the black background was covered, but still it took a long time, we need to reward more I say!) and B) took so long to get 1000 uploads on the Adapted Learning site. Come on folks! I know you have dozens and dozens of boards on your hard drives, upload them already! Even if you think they aren't good enough, even if you think you are just a beginner, you never know what your board will inspire in someone else. Let's see if we can hit 2,000 boards sooner rather than later! Perhaps you may win a tee shirt! (I uploaded about 90 some odd boards I think, maybe more, that's just under 10% of the total boards. I had a decent chance at that tee shirt - you could have a decent chance at the next one. If tee shirts don't motivate you let the good will of sharing motivate you.)
at 10:05:00 PM