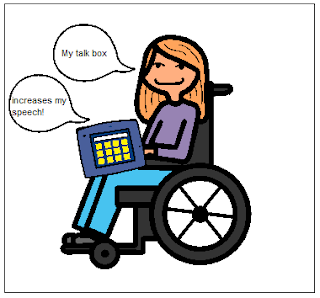 Although we all have heard the rumor that some people believe implementation of AAC will impede speech development in people with developmental disabilities, most of us know this is not true. In fact most studies, as show by this frequently cited meta-analysis, indicate that speech production will either not change or will increase. Increased verbal production is by far the more likely of the two!

We are living that with two students in my classroom right now. One has had a high tech dynamic display device for a short while (a bit over a year and had a Tech/Speak before that), but did not use it well until recently when the SLP removed the non-sensical visual scene displays. That student has had an onslaught of verbal behavior at home and at school. Some of the speech is intelligible and some less so, but one thing is definate, verbal speech production has gone through the roof!

Another student has been verbal for sometime, but did not speak much. In September a low-tech, static display device was introduced in certain situations, for example to indicate feelings. This student is now able to indicate the range of emotions taught by use of the device from happy and silly to mad and tired. If this student learned nothing other than how to communicate these basic emotions this year it would have been one heck of a productive school year. (Trust me much more has been learned and it is only the end of January.) We have faded the device for emotions but have added it in for teaching new verbal language.

Now imagine if we knew then (when my high school students were infants and toddlers) what we know now. What if they had had AAC at 10 months or even 24 or 36 months as recommended now? Imagine if students weren't waiting, even now that we know this, until they were in their 'tweens or teens or adulthood or until they reach some imaginary "prerequisite" to have access to augmentative speech intervention? What a world it would be.
at 9:49:00 PM