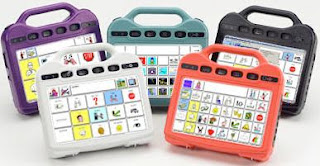 PRC has released a very cute device called the SpringBoard Lite. Like the Dynavox M3 it is for AAC beginners or emergent communicators. The device is pretty tiny and looks a lot like the OLPC at first glance. It is a dynamic display device using Minspeak Icons or Mayer-Johnson PCS symbols and digitized (groan - that means you record it yourself... i.e. your voice on some kids device) speech. It has all the fancy things like IR environmental controls, visual scenes, and limited bluetooth. It also has a great offer of integrated Intellitools Classroom Suite, which may end up being a real selling point. Of course it may be a Lite device, but it doesn't come at a Lite price at over $2,00o. It means committing to Minspeak for the user, which means committing to training everyone else in Minspeak and hoping the user "gets" it. Lastly I will make the same point I made about the M3, why bother getting an "emergent" user device? The price is not that different so go for the gold, just get a Springboard or a Dynavox V or whatever the non-emergent device is so the child isn't stuck with it until insurance or the district will pay for the "real thing". Plus, digitized speech, ick.


Here is the run down from the PRC website: